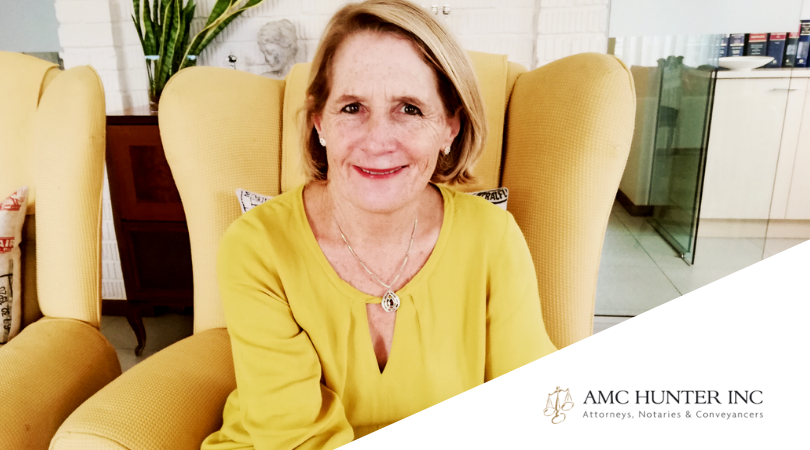 “I think I just always had an innate sense of justice and fairness.” – Karien Hunter

In a time where very few women ventured into the legal profession, Director and Founder of AMC Hunter INC, Karien Hunter embarked on a journey that would become a successful career spanning 40 years.

Founding AMC Hunter INC in 1987, she has been leading at the head of this female-run and owned Practice for over 30 years. As a Women in Business multi-award winner, Karien has proven that hard work and dedication to your craft plays an essential role in reaching success.

Hailing from Potchefstroom, in the North West Province of South Africa, Karien notes that she has always had an innate sense of justice and fairness.

“Casting my mind back, more than 40 years ago, when I was at school, age 16 or 17, I think I just always had an innate sense of justice and fairness. I somehow ended up studying law.

There was no real career guidance in those days. But what I can say is that within the first week of attending lectures, I absolutely loved it. I fell in love with law.”

After completing a B Iuris Degree at Potchefstroom University in 1979, Karien went on to complete an LLB degree with UNISA in 1983, during which period she was employed as a Public Prosecutor by the Department of Justice and as an Administrator of Estates with a large banking group.

“The team was initially just one other Articled Clerk and myself. She swept the floors and sometimes I would sweep the floors as well. That’s how we started.”

Karien believes that as with most things it takes time to build success and while numerous lawyers, conveyancers and paralegals have come and gone over the years, her current team is the strongest it has ever been.

“I think the team we have now is possibly the best we’ve ever had. There is so much depth in the Practice. My core staff have been with me and now with my Partner and Co-Director Sarikha Singh for the better part of 15 years – it is not difficult to lead.”

Karien and her team are responsible for a large number of property transactions each month in the Deeds Office for KwaZulu-Natal. They are on the panel of most major banks and have consistently scored in the top percentile of the province as conveyancers. In addition to this, Karien and AMC Hunter INC provide oversight to a large number of charitable organisations through the Gatekeeper Foundation of which she is the founder and a trustee.

Defining success as making a difference, Karien offers some advice to aspiring conveyancers and lawyers in saying:

” Follow your passion. Don’t study law unless you are passionate about it. If you embark on your legal studies and have any doubt, rather choose something else that will make you happy. Always follow your true passion.”

AMC Hunter INC is an amazing firm to work at. The entire team accepted me…

Deshini Moodley who attends to the registration of ABSA bonds allocated to AMC Hunter Inc.,…

The Covid-19 Pandemic has highlighted the need for more online services from the conveyancing industry.…